Fast and easy AEM deployment in the cloud

Deployment of AEM in the cloud does not have to be complex and time-consuming. In this article, we describe a novel approach to AEM setup in the cloud using Gradle AEM plugin (GAP) supported by Terraform for the infrastructure and Ansible for configuration management. This article is the outcome of our internal RnD project and we believe it can be useful when you think about in-house AEM deployment model, outside of the Adobe's offering.

AEM in the cloud?

Setup of the AEM in the cloud nowadays is easier and more automated than ever. Adobe Cloud Manager provides automated tools for continuous integration, delivery (CI/CD) and tests of the application code deployed on top of the cloud environment. Different AEM deployment models are explained in this Cognifide blog post. But what if we would like to run AEM in the cloud (AWS, Azure, GCP etc.) outside the Adobe framework for example for development or testing purposes?

Setup of AEM in the cloud can be divided into setup of the underlying infrastructure and deployment of the AEM application. It requires some knowledge about cloud services, infrastructure security, automation frameworks and DevOps approach to make this process easy but still flexible. What does it mean?

Infrastructure as a Code (IaaC) together with Configuration Management paradigms allow us to design and implement the framework for setup of the AEM in the secure and reliable virtual environment in the cloud using Gradle AEM Plugin (GAP). We called it GAp-In-Aws (GAIA) because currently it supports AWS cloud infrastructure setup, but solution described in this article can be cloud agnostic, it just requires adapting Terraform configuration for chosen cloud provider. Sounds good?

In the GAIA proposed solution, we divided process of setup AEM in the cloud into two parts: 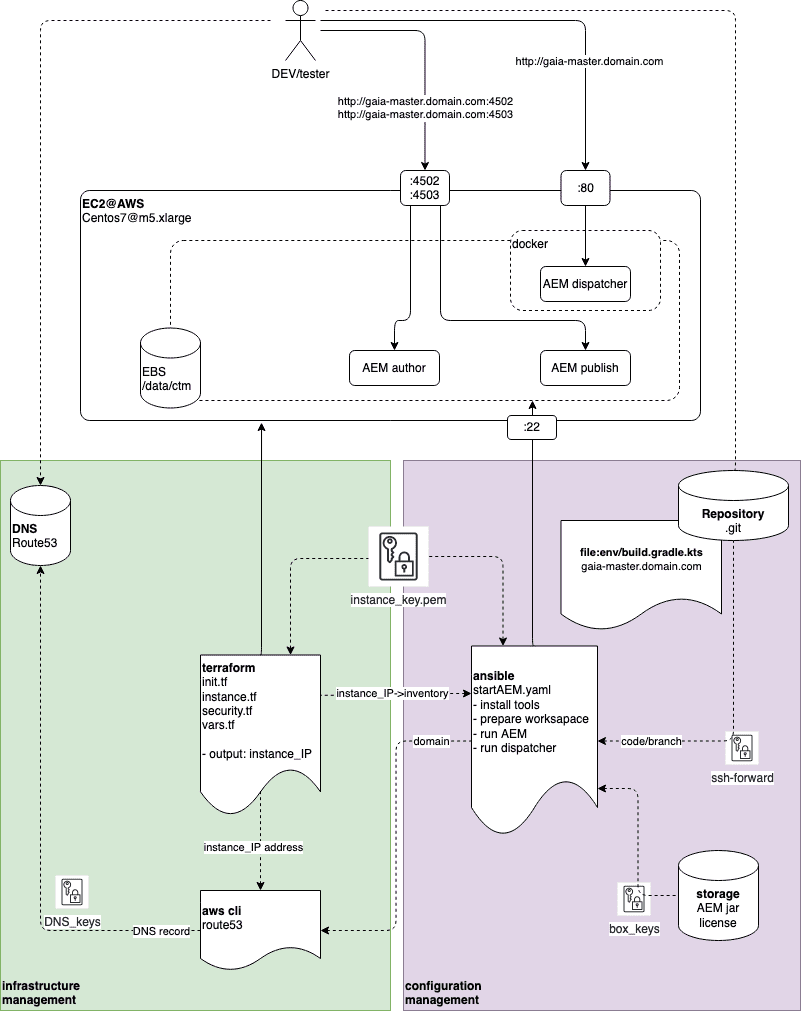 Nice thing about GAIA is that it allows us to spin up a new environment quickly and enable testing per feature branch. It makes the process suitable for automation of the feature branch tests on a unique environment with dedicated URL.

With the security in mind GAIA requires the following permissions:

With all these security permissions, GAIA can be run from any developer workstation (OSX, Linux or Windows with WSL). But it would be more desirable to setup CI/CD jobs (e.g. in Jenkins, Bamboo, Azure DevOps) running on agents with all of these permissions which allow them to perform both infrastructure setup and AEM configuration.

How simple is it?

There are two main parts to successfully create a ready-to-use environment. Below is the example of running full setup on AWS and use custom DNS for routing. All steps are completely idempotent, so there is no risk to create more than one or override existing environment.

Starting point is to align Terraform configuration to desired requirements by customizing parameters like region, domain, instance type, whitelisting and many others. At this stage, provider key must also be configured. The next step is to execute:

Then Terraform provides list of planned actions to perform over the cloud which should be confirmed by the user. Here is the example output from Terraform after setup of the infrastructure inside the AWS cloud:

After around ~3 minutes AWS instance is up and running. This is the time to configure DNS routing:

At the end of this process we have virtual machine running in the cloud and DNS configured to point to this instance under configured URL. The EC instance has the following ports open:

Security rules are part of the configuration too and allow us to access the environment only from given subnets, VPN company network etc. Terraform scripts can be adopted to support other cloud providers too.

To manage cloud instance configuration, we use Ansible. Windows system is not supported by Ansible, so if you are forced to use this system then a solution would be Windows Sub-system for Linux (WSL). It allows you to install any Linux distribution and proceed. Like in previous part, all parameters can be configured.

Here is the ansible playbook code snippet to start AEM instances and dispatcher:

where gap_path is any location on the mounted EBS volume (e.g. /data/gaia/gaia-gap).

Then it can be executed by a single command:

You’ll be asked for credentials to be able to download AEM jar and license files from a configured URL. After around 16 minutes AEM is ready to use.

When environment is no longer needed, one command stops and removes it completely from AWS.

Above steps assume that all prerequisites like Ansible and Terraform, required keys and permissions are met.

The solution is designed for faster and easier management of non-production environments (like DEV, INT) using proven-on-battlefield Gradle AEM Plugin. Entry level of solution based on Terraform and Ansible is more friendly to developers than for example Chef-based solutions which we've been using at Cognifide so far. It is less complex, just needs SSH connection and doesn't require additional configuration servers (like Chef server) because it is agentless. Ansible configuration is based on YAML, so in our opinion it is more human friendly than Chef's Ruby-based configuration.

Ideas for next steps are:

GAIA solution benefits from environment as a code approach. Provisioning of the infrastructure through versioned definition files and keeping the AEM configuration in one place makes the solution compact and trackable.

GAIA is not suitable to setup complex or production-like environments as it assumes that all AEM components are running on a single virtual machine without redundancy, load balancers etc. Keeping that in mind, GAIA can be a right choice for developers and testers to enable them to conduct various types of tests in any number of isolated environments. Imagine, a complete AEM environment, with code deployed from a given feature branch, spun up on demand in the cloud in less than 20 minutes – yes, it is possible and seems cool!

The table below presents the times of execution of each step, measured for two cases of different AEM source origin.

Hero image by Francesca Ciarlo, opens in a new window

Bartłomiej Gątarski completed Ph.D. at the Faculty of Chemistry of Adam Mickiewicz University in Poznan (computer simulations of physicochemical behavior of droplets). He's been working for over 3 years as AEM/Java engineer with a great passion to learn new things and travelling to uncommon places. At Wunderman Thompson Technology until February 2021.

Łukasz is a senior systems engineer. He is a specialist in networking, cloud infrastructures as well as automations which make complex engineering a bit easier and user friendly. He loves diagrams and things well documented. In free time he is passionate about electronics and genealogy. At Wunderman Thompson Technology until December 2020.