Image renditions are not the only actions to perform on your AEM assets. Another essential aspect is asset metadata. Depending on the usage, metadata can drive your brand taxonomy, can help authors find the asset or finally be the driver for your asset brand governance. Thanks to the Asset Compute service being part of AEM as a Cloud service, you can generate custom renditions by extracting important features from your assets using intelligent services.

In my previous post, that was about how to generate intelligent renditions with AEM as a Cloud Service, I showed how to build an Asset Compute worker that generates custom renditions, driven by intelligent services. In this post, I'm going to show how to implement a worker that generates custom metadata. It is a relatively easy task, as the worker implementation is pretty much the same, only the response is different. Instead of the asset binary, it must be XMP data structure serialized into an XML file.

I've previously explained how Asset Compute Service works and the way data flows across the layers. For metadata workers, things are quite similar. The only difference is the outcome of the custom worker, which is an XML file instead of the asset binary. As the XML document contains asset metadata, it has to conform to the XMP specification.

Once again, I used imgIX as my intelligent service. But this time, I used a function that detects faces in the image. That function is looking for coordinate data for the bounds, mouth, left eye, and right eye of each face and adds it to the JSON output. Since, we're interested in the face bounds only, other data is going to be ignored. This data is about to be stored in AEM as new metadata fields: faces:count and faces:bounds. However, instead of just showing them as yet another field in the AEM metadata editor, I created a custom component to visualise those regions. And here is the result for a sample asset. 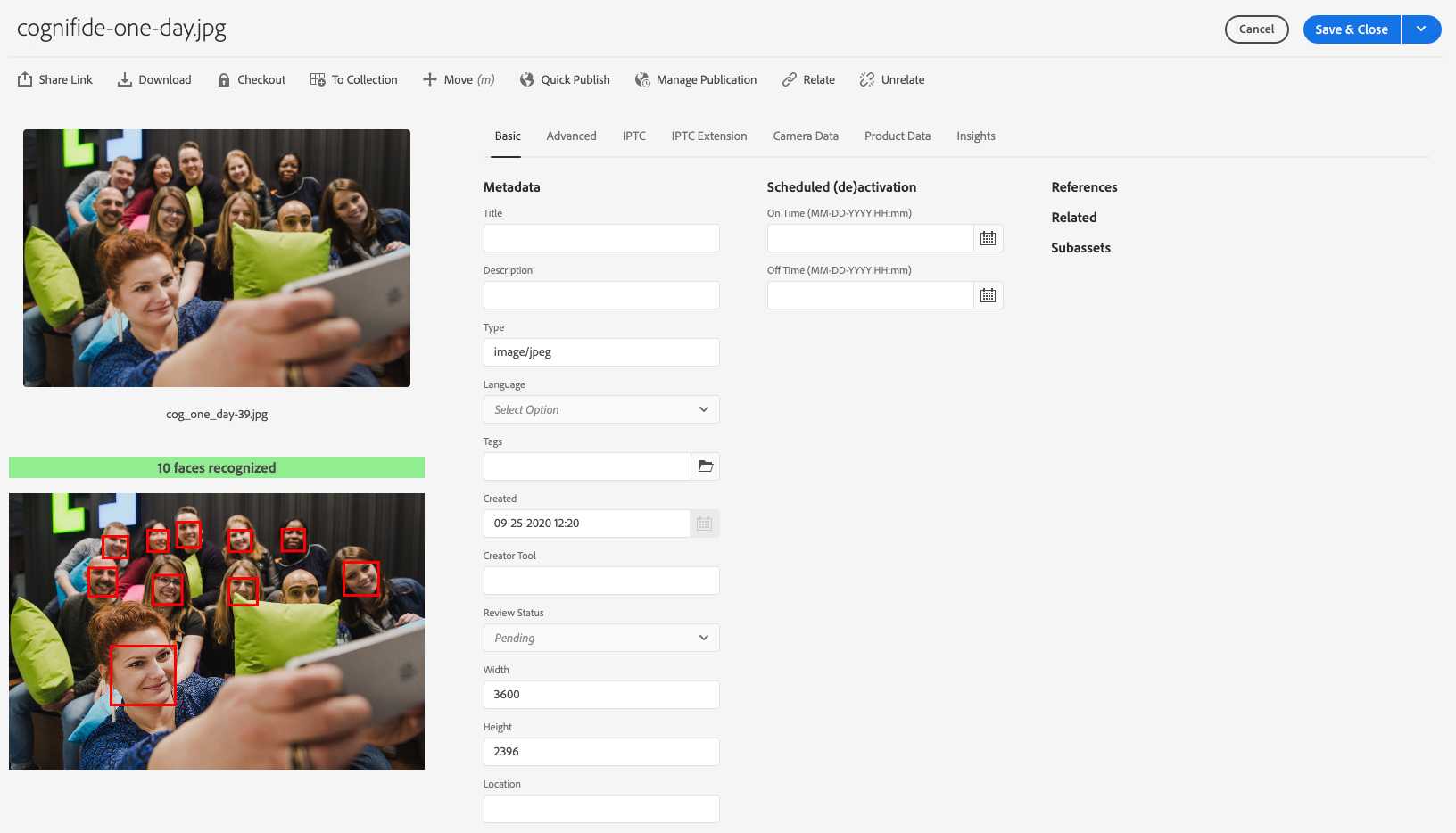 You might be wondering why one of the faces doesn't have a red rectangle. It is because only a fragment of the face is visible, so service was unable to determine its bounds.

What we will build

Conceptually, the data flow is similar to the renditions worker, as you can see in the diagram below. 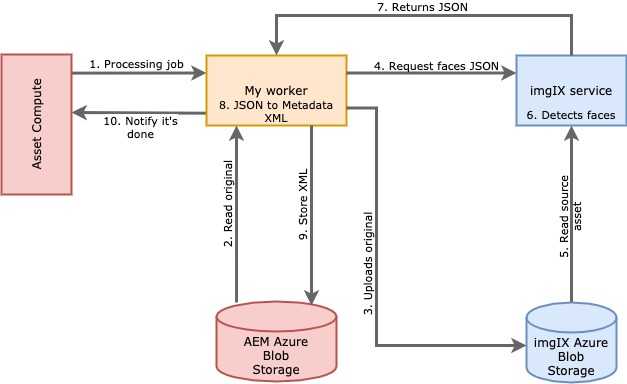 Before implementing the worker, you'd need to set up all the services. You can do it by following the setup steps from the previous post.

Edit the manifest.yml file and add an inputs object, as shown below. This file describes the IO Runtime action to be deployed. And input param sets the default parameters with values referenced to our environment variables. Those params are available in IO Runtime action as param object.

We also need to add a couple of dependencies to our project.

Edit the worker source code (located under my-custom-metada-worker/actions/<worker-name>/index.js) and replace it with the following code.

Most of the code in the detectFaces function is the same as for rendition generation. Notable differences are:

After a couple of seconds, it will open Asset Compute Devtool in your browser. Within that tool, you can test your worker without the AEM.

Our metadata worker doesn't require any extra parameters. However, the rendition parameter should have XML extension, so the framework knows what type of response to generate. Run your worker and see the XML is generated on the right-hand side of the Asset Compute Devtool. If you open it, you can see a result similar to this.

To let AEM use our worker, deploy the app by running the command.

As a result of that command, you will get the URL of your worker, similar to the below. Write down that URL as we need to put it in AEM configuration.

As I mentioned at the beginning of the article, we will use a custom component on the metadata editor to visualize our faces metadata. I created a simple AEM application with the mentioned component and all it is available at my Github repository.

You can merge it with your application codebase or simply deploy as it is to your cloud instance. Once you deployed it, you need to configure AEM to use our custom worker. 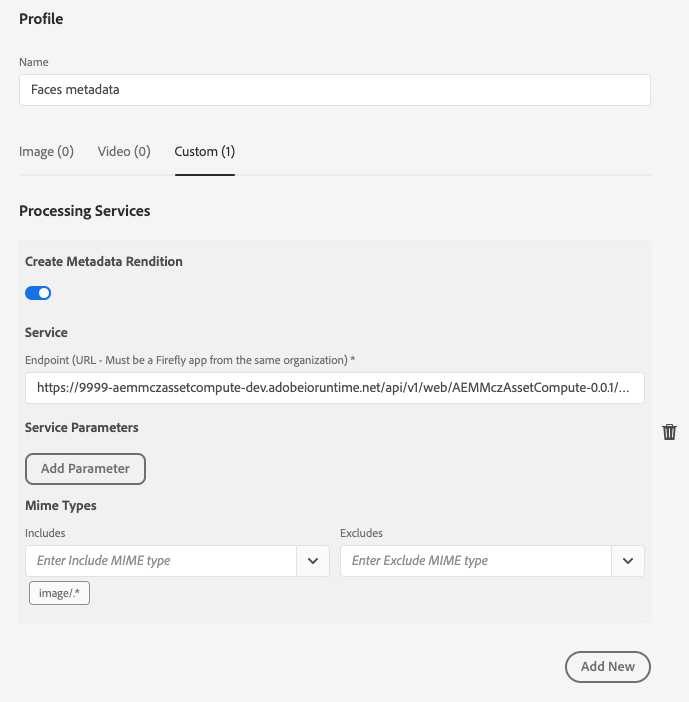 As the last step, you need to apply the profile to DAM folder.

Now you can upload images to the folder and see the result on the asset metadata editor page. Additionally, you can inspect the metadata node via CRXDE to see how AEM merges it. 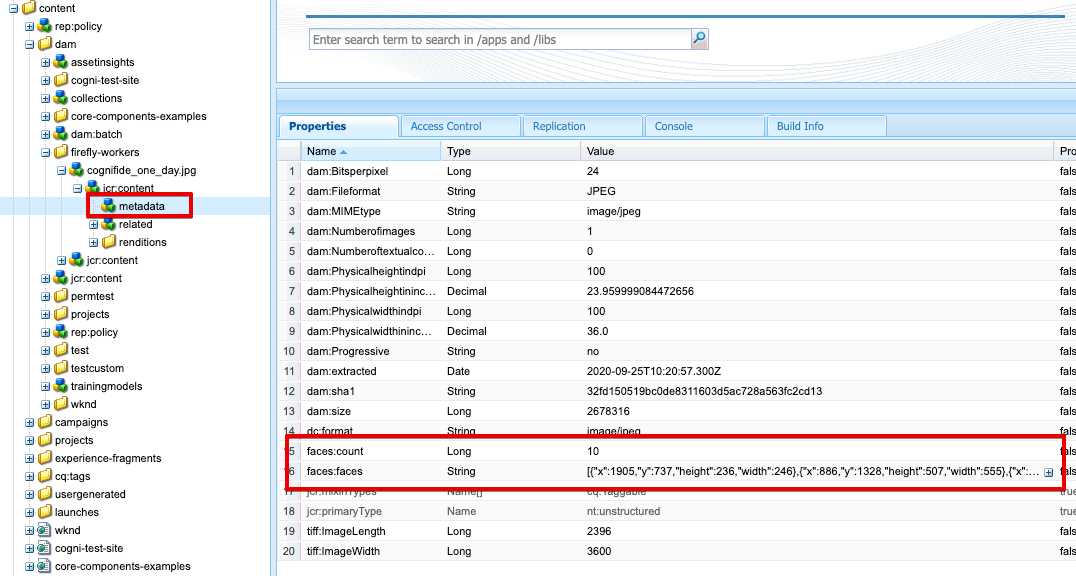 As you saw in this and previous article, the Asset Compute workers are relatively simple things. However, if you integrate it with any asset processing intelligent services, they open a door to build a completely new category of solutions. Thanks to the custom metadata workers, you can now start thinking about use cases touching subjects like brand governance.

Brand governance workflows for assets such as:

All of this seems to be easy to accomplish. However, there are some serious challenges to solve when it comes to the development process. If you develop your workers, you want to test it locally together with AEM implementation - a good example is my custom component for metadata editor. At the moment, it's a cumbersome process as it requires deployment on the AEM as a Cloud service instance first, or manually simulate (change in the CRX) the result of the worker processing.

Asset Compute service support is not enabled on the local AEM-SDK, so you need to figure out other ways of doing it. I was experimenting with two approaches that might be helpful in a short-term:

Marcin is a hands-on software architect involved in the architecture, design and implementations of the platforms for several small to large clients. He has been in the software engineering industry for over 15 years starting with low-level programming of FPGA and embedded devices, through billing systems for cell phone companies, to enterprise-grade web platforms. His interests are mainly focused…